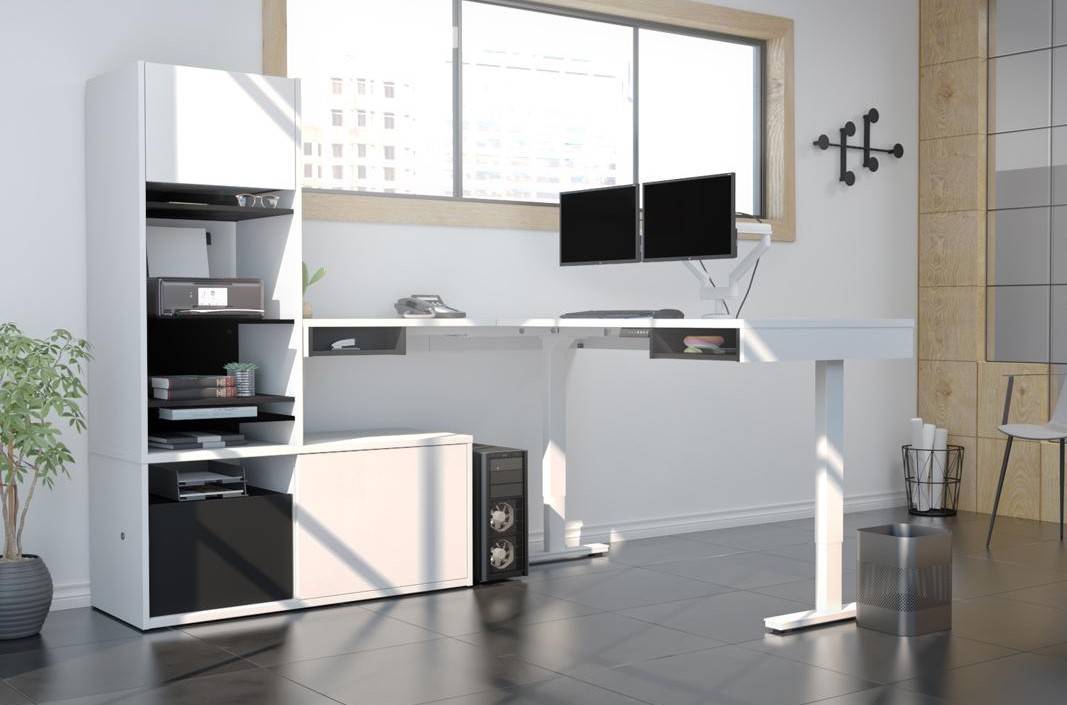 So much better for employees overall health, well-being, and, ultimately, productivity – studies support standing while doing desk work.
Increasingly, employees who work hours upon hours of desk work every day are more likely to complain of chronic pain. Issues such as postural imbalance, repetitive strain injuries, and a sedentary lifestyle – or, ‘sitting disease’ – are more common than ever before.
In the United States, a whopping 7.6 million people list back pain as their reason for filing disability claims. Research confirms that slouching and similar seated postures can be responsible for backaches, headaches, fatigue, and poor concentration – issues that affect not only physical health but vital productivity at work as well.
Fortunately, there’s a solution to help reverse the physical discomfort and damage caused by sitting day after day: the standing desk.
Standing while working helps to counter the adverse effects associated with hours spent sitting at a desk. Even just 30 minutes at a time (4 hours a day or more) standing while at work can have significant impact on the health and body of desk-bound employees. 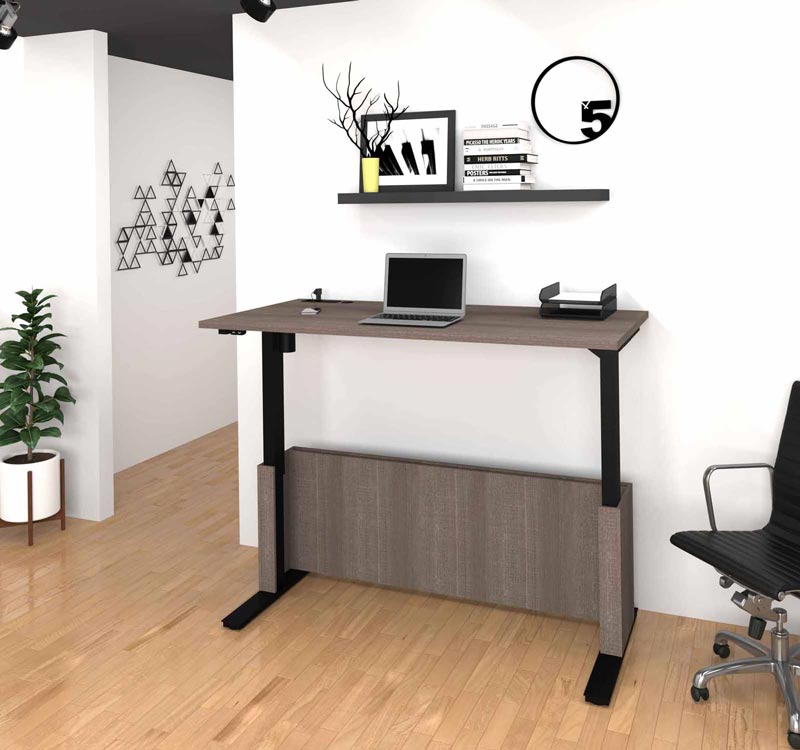 Sit-Stand desks, also known as standing or height-adjustable desks, are becoming more and more popular in the workplace. For good reason: they make it very easy for those workers whose work is concentrated at a desk to change posture throughout the day while they work.
Being able to change posture throughout the day, moving from sitting to standing, promotes a variety of benefits as listed below.

80% of adults will experience varying degrees of back pain at some point in their lives. It’s also one of the biggest complaints of office workers who are seated all day. In addition to the studies that have explored the positive impact of standing desks for office workers with long-term back pain, the Take-a-Stand Project found that participants who spent an average of 66 minutes of their workday standing experienced a 54% reduction in the upper back and neck pain. 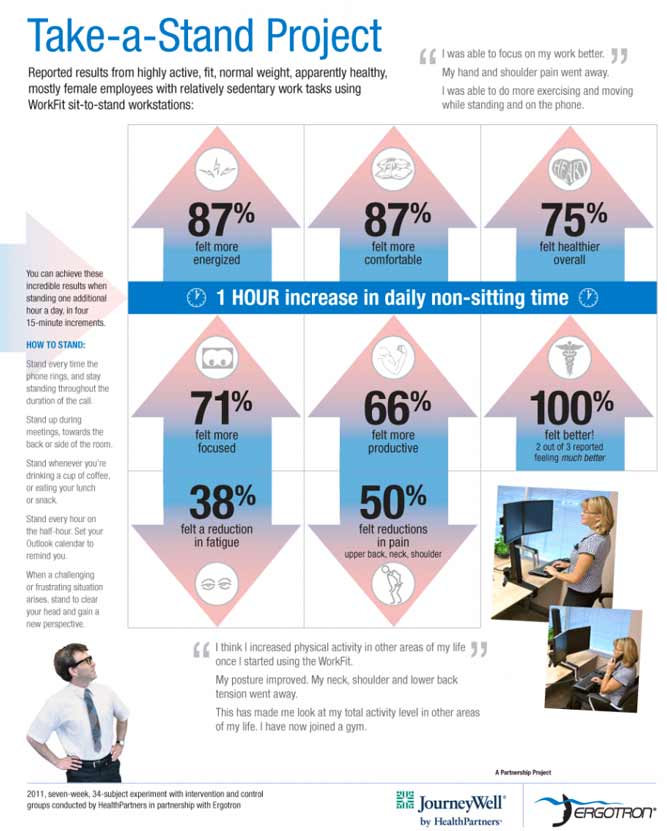 2. Lower your Risk of Heart Disease

More than 44% of office workers say they have gained weight in their present job, and 53% of those said they believed it was due to sitting at a desk all day. By standing instead of sitting, it’s possible to reduce the risk of weight gain by burning about 50 extra calories an hour. If an employee were to stand for 3 hours each workday, it could equate to 750 calories a week. Over a full year that could mean 30,000 extra calories expended or about 8 pounds of fat!

Blood sugar increases have are often linked to a general sense of poor health. In 2013, a small study of 10 office workers showed that standing for 185 minutes after lunch reduced the workers’ blood sugar levels by 43% compared to sitting for the same time period. Another study of 23 overweight office workers found that alternating standing and sitting every 30 minutes reduced blood sugar spikes by an average of 11.1%.

Increased sedentary time and sitting have been linked to an increased risk of both depression and anxiety. During the Take-a-Stand Project a group of 24 office workers was provided with a standing desk for four weeks. Participants self-reported improved mood states where they reduced time spent sitting by an average of 66 minutes. At the end of the 4-week period, responses were as follows as a result of having the sit-stand device installed at their workstations:

When the sit-stand desks were removed, the participants reported a deterioration in mood.

Of primary interest to employers is the increase in productivity experienced by standing desk workers. Enhanced mood and energy, in addition to reduced back, shoulder, and neck pain tends to improve productivity and mental alertness. When the body as a whole feels better, it functions more efficiently and productively.
A Bestar Standing Desk offers optimal comfort! The height of our standing desks is so easy to adjust that you can change it several times a day to work in the most comfortable position. The electric mechanism allows you to quickly and quietly adjust the height of the table from 28″ to 45″.
Healthier work life isn’t the only benefit. The improvements in physical, metabolic, and mental health from standing at work for more extended periods can impact your life in ways you never thought possible. 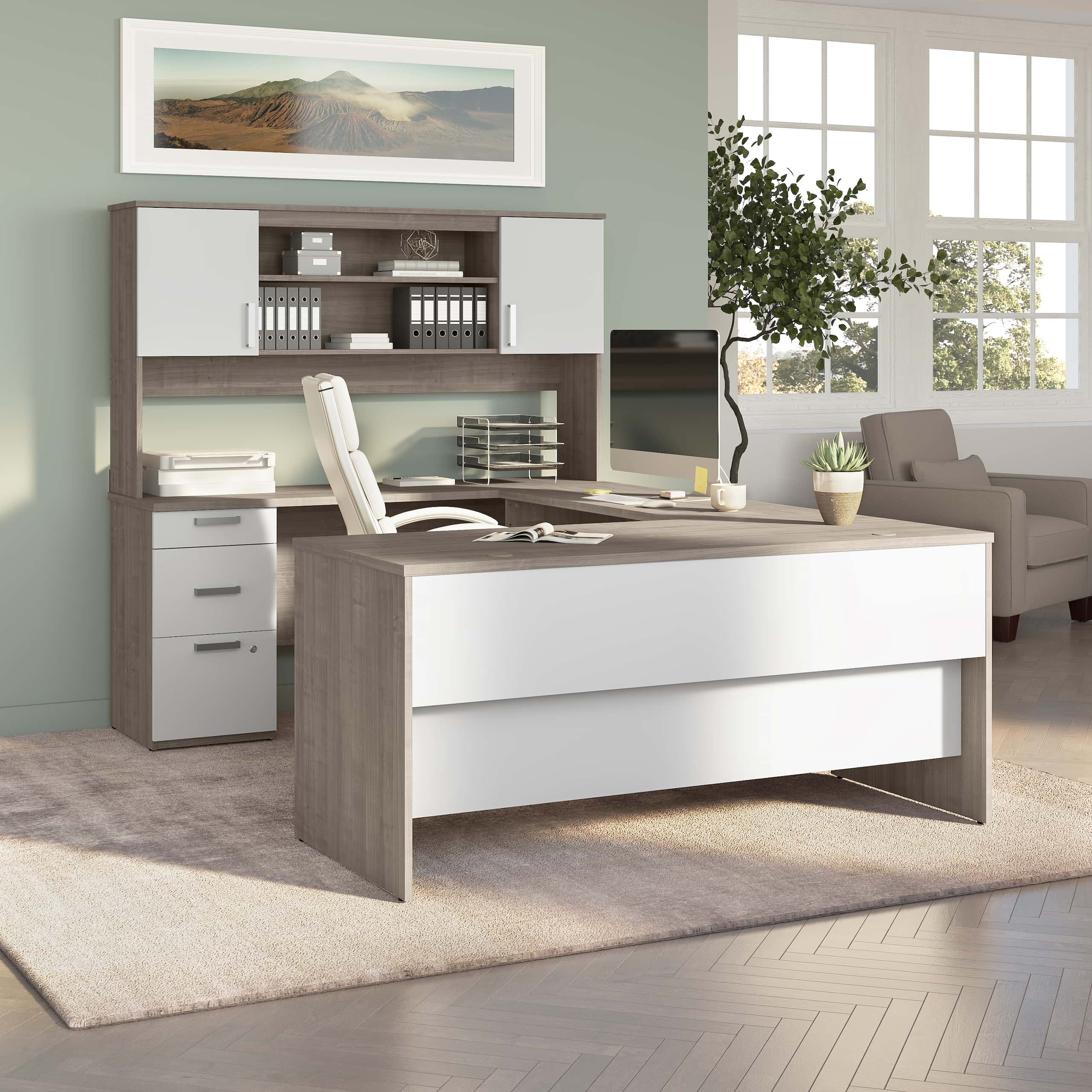 Business | Home Office 4 Tips to Increase Productivity at Work 23-09-2022
Whether you’re working from home or at the office, finding ways to stay on top of your game at work is crucial. You...
Read more 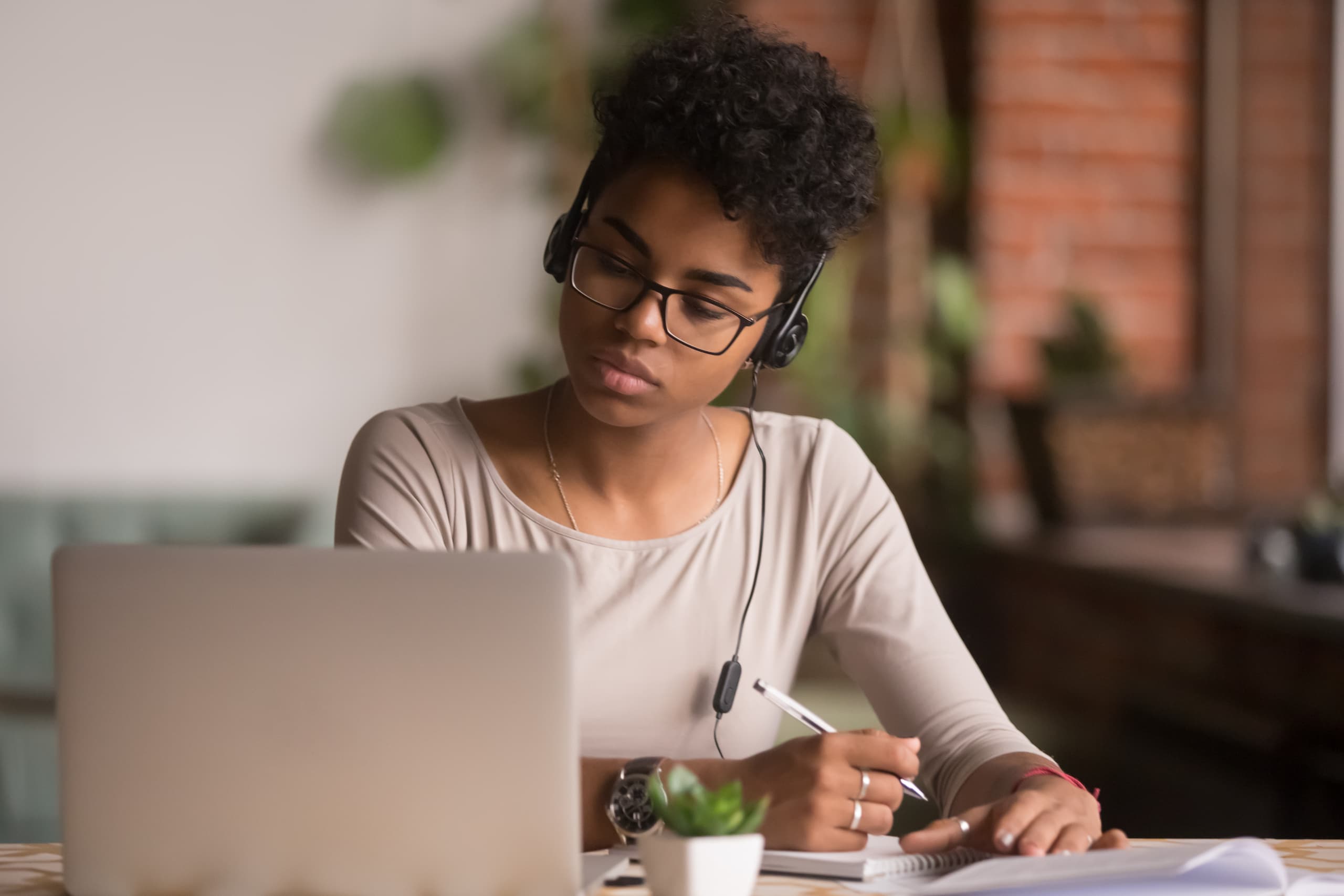 Small Spaces  5 Ways to Create a Productive Study Space in Your Dorm Room 26-08-2022
It’s back-to-school season! If you’re starting university or college this year, then you might find yourself living...
Read more 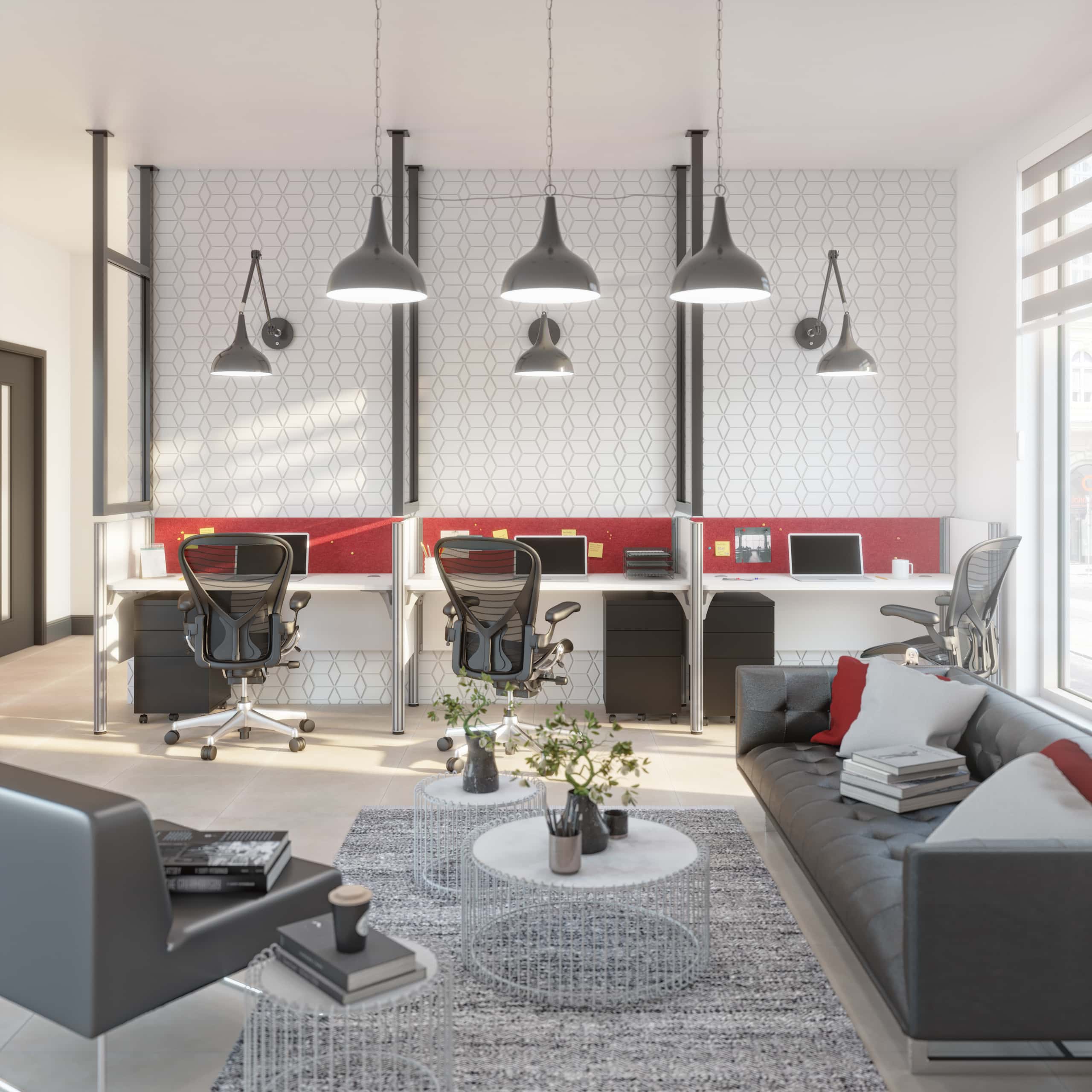 Business 4 Types of Office Layouts to Consider for Your Business 22-07-2022
Creating a productive, comfortable, and efficient office space is the key to a successful work environment. It’s...
Read more 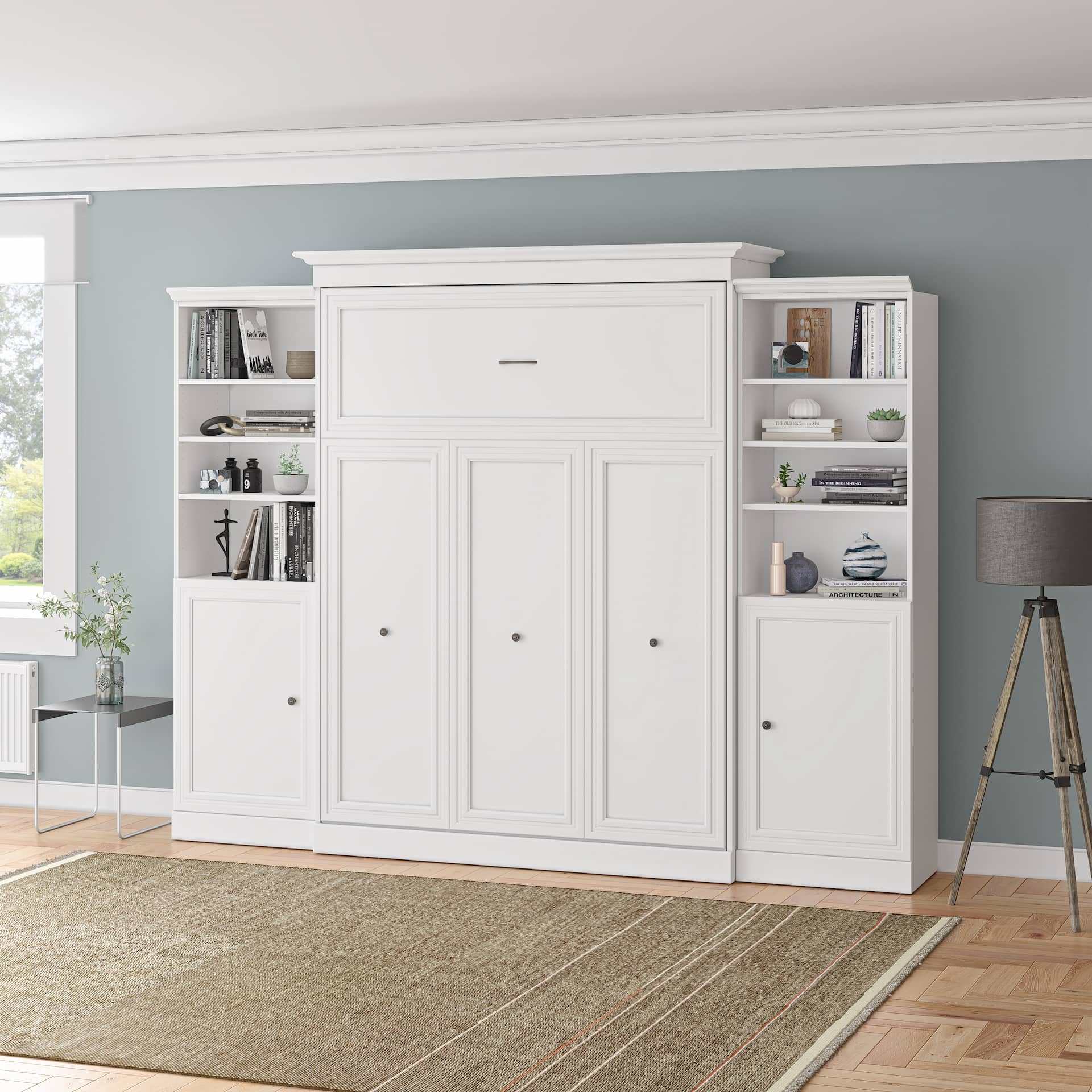 Home Essential Furniture to Buy When Moving to a New House 24-06-2022
Whether you’re a first-time home owner or you’re finally buying your forever home, moving into a new home is truly...
Read more

How likely are you to recommend Bestar to a friend or colleague?

Not at all likely

What is your main reason for choosing this score?

Back
Thank you for your feedback

This month is jam-packed with unbeatable sales at Bestar! Sign up to this exclusive newsletter to see each daily promotion offered!

Subscribe to our newsletter to stay up to date on our best deals.

New subscribers get 15% off their first order!

Your cart is empty